The Buffalo News: From NFL to the force: Niko Davis tackles new role as head of Buffalo Police Explorers 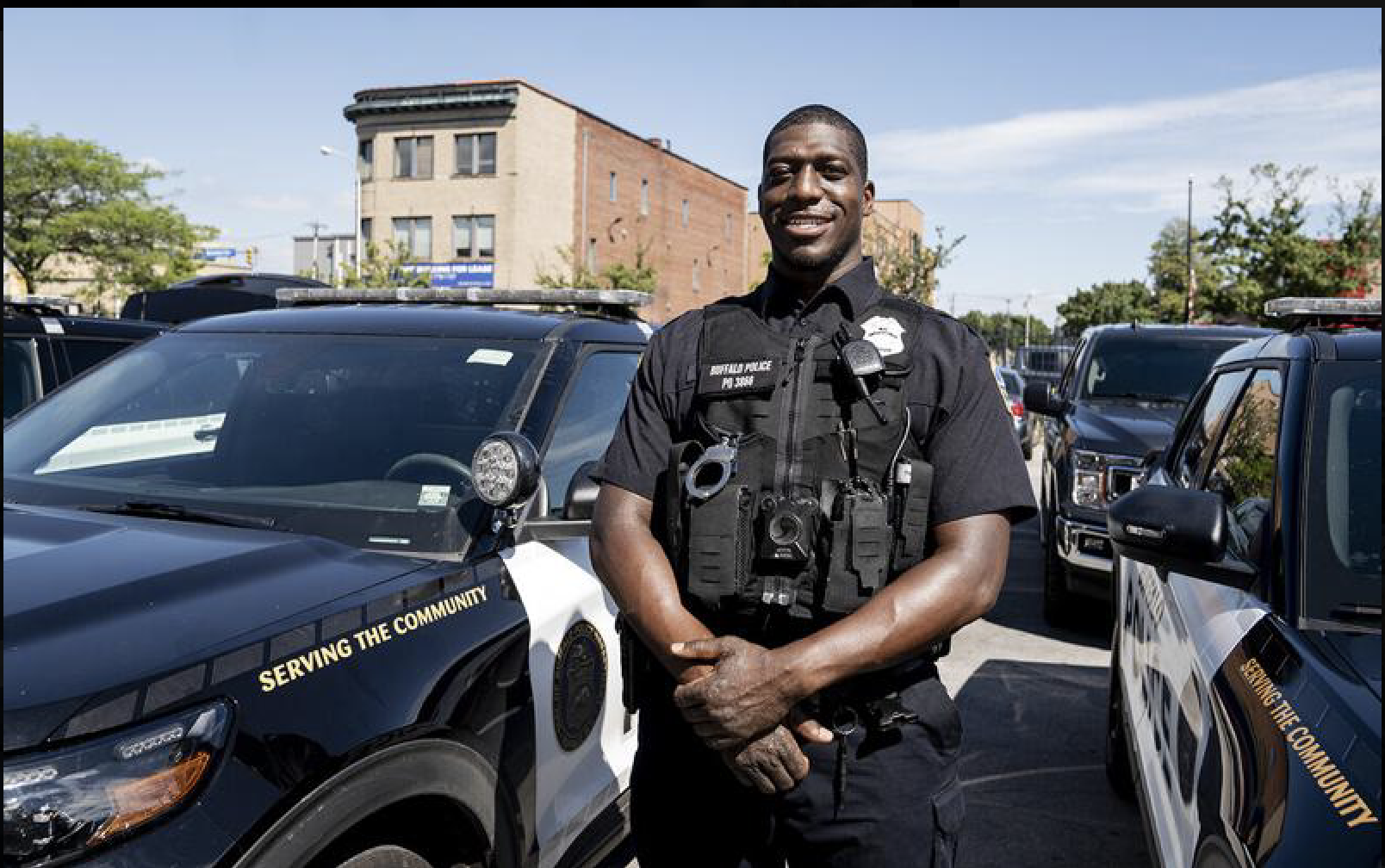 Buffalo Police Officer Niko Davis, who recently became the new executive director of the Buffalo Police Explorers, remembers one of his highlights during his days in the NFL.

At a Pittsburgh Steelers practice, the defensive lineman lined up against the star-studded offense that included Ben Roethlisberger, Le’Veon Bell and Antonio Brown.

Davis dropped into zone coverage and intercepted Roethlisberger. He did not get the chance to run the ball back for a pick six, however, as he was promptly tackled by Pro Bowl tight end Heath Miller.

Davis did not stick around in the NFL for 10 years like he hoped. He never got to play in a regular-season game. But he took the discipline required to play high-level football and used it to become a successful police officer.

“Discipline equals freedom,” Davis said. “Having discipline is the avenue to anything you want in life.”

After only 2½ years as an officer, Davis was introduced as the leader of the Explorers at the National Night Out event on Aug 2.

The program takes a group of 14- to 20-year-olds and gives them guidance and direction, all while teaching them about law enforcement. This year’s edition begins Sept. 6, and recruits can apply before Tuesday.

“We’re going to have students from wealthy backgrounds to impoverished backgrounds, from very good school systems to very poor school systems,” Davis said. “We’re here for one common goal: to go through this experience to grow and learn and to set all our differences aside.”

Davis relishes the opportunity to serve in his hometown. He said after living many places, Buffalo is still his favorite.

“I don’t love any place more than I love Buffalo,” Davis said. “I just have so many pockets and communities of people that I know and have connected with.”

While he was growing up, Davis was involved with church, a dance team and a drama team. He did not play organized football until 10th grade, when he joined the team at Lafayette High School.

He had the physical stature and grades to interest football programs at UB, Syracuse, Princeton, Harvard and Dartmouth, but did not receive any offers because of a lack of knowledge about the recruiting process. Davis did not even possess any game film for coaches to work with.

“I didn’t understand anything, I really genuinely didn’t,” Davis said. “I just didn’t have someone to coach me through it.”

After high school, Davis attended an “organized gap year” program in Fort Myers, Fla. The purpose of the program is to give young people guidance and do outreach. If participants decide to stay for a second year, they become part of the leadership team and help first-year students.

During Davis’ second year with the program, he met a first-year student whose dream was to be a college quarterback. Davis ran routes for the aspiring QB, and the duo started playing pickup games in parks against random guys: sometimes tackle, sometimes two-hand touch.

“If he and I were on the same team, it was ‘Murder, She Wrote,’ ” Davis said. “We ran through the city. They called us Tim Tebow and Vernon Davis and were like ‘nope, separate them.’ “

In February 2010, the two took a weekend visit to Liberty University for a prospective students event.

“I couldn’t believe it; it was the biggest campus I had been on,” Davis said.

After checking out the football team, Davis enrolled at Liberty as a regular student, but made the football team following walk-on tryouts. After a successful college career, Davis went undrafted in 2015, but signed with the Steelers for training camp.

Davis performed well until an injury set him back. The Steelers placed him under the waived/injury designation, which meant the team would release him once he became healthy.

“I was pretty bummed to hear that, but at the same time it was encouraging,” Davis said. “I felt like I competed well playing against guys who were on multiyear contracts.”

Davis signed with the Kansas City Chiefs in 2016, but did not make the 53-man roster. From there, Davis turned his attention to being a police officer, which had been a longtime interest of his.

“I have a lot of brothers, and all us have always been kind of fascinated with uniformed officers, whether it be military, G.I. Joe types or police officers,” Davis said.

When Davis and his brothers were younger, they would attend the car show at the Buffalo Niagara Convention Center and ask questions of the state troopers in attendance. Three of Davis’ brothers later joined the Army. Another brother took the civil service exam with Davis, but decided to continue working at General Motors.

Davis joined the Buffalo police force in January 2020, not long before protests and riots increased tensions between police and the public for much of the year nationwide. In 2022, he has a more positive outlook on police and community relations.

“What I’ve seen thus far in my career is that most people are willing to talk with you, are willing to level with you,” Davis said. “If you can just talk to people like regular humans, they’ll usually talk back, and you can kind of find some common ground.”

Davis was in Florida at the time of the mass shooting at the Tops Market on Jefferson Avenue. He returned the next day, ready to do whatever he could to help his fellow officers.

“To be quite frank, we were fired up; we wish we could’ve been there when that guy showed up,” Davis said. “We wish instead of preying on innocent people, that guy ran into someone who was prepared to encounter him.”

Davis admires the resolve of Buffalonians months after the shooting.

“The community has shown itself to be resilient beyond words,” Davis said. “Everyone has come together from all different beliefs, backgrounds and walks of life to do what we can to make this right.”

Davis said he wants his Explorers recruits to view police officers as regular people and spread that message.

“This whole program falls under the umbrella of humanizing the badge,” Davis said. “When you see an officer in uniform with all the bells and whistles and all their gears, sometimes it feels like ‘whoa, that’s a uniformed officer,’ and you don’t feel like that person can have common ground or levity with you, but they can.”