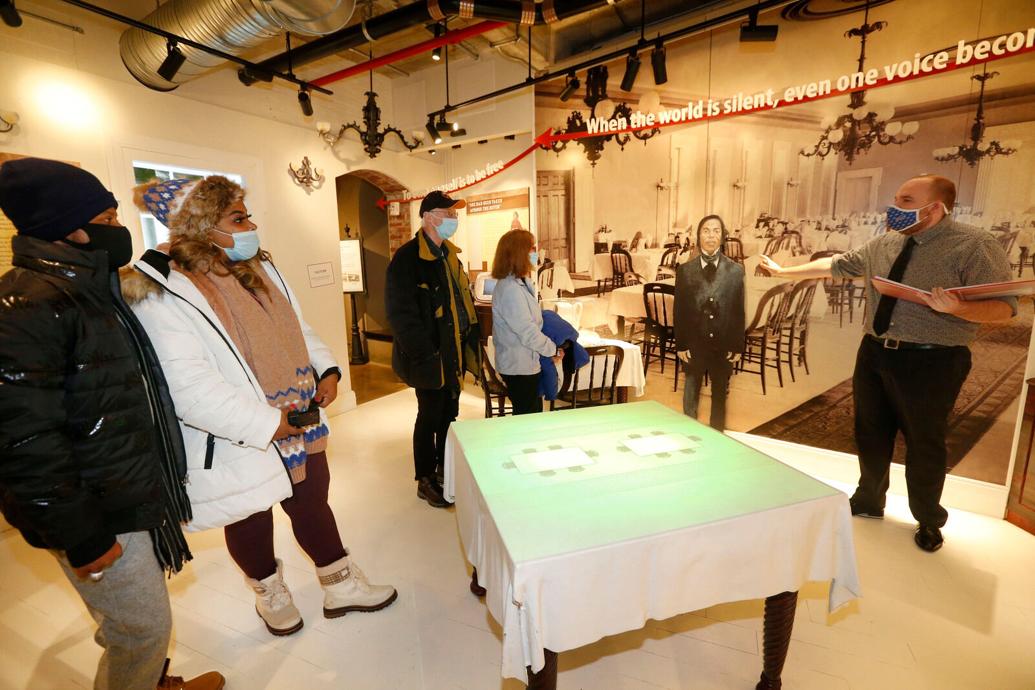 Built mere steps from the site of a bridge that enabled many enslaved Blacks to escape the United States before the Civil War, the Niagara Falls Underground Railroad Heritage Center offers an up-close look at one of American history’s most dramatic stories.

The interactive Heritage Center includes the permanent exhibition, “One More River to Cross,” with stories of the Underground Railroad in Niagara Falls – the name given to a loose network of citizens who smuggled escapees from the South to Canada – including the important roles played by its location, geography and residents.

The attraction has drawn some 40,000 visitors since it opened in 2018, Director of Operations Evan Wright said. But some may find it hard to locate. There’s no curbside signage identifying the Heritage Center, which shares a building with the Niagara Falls Amtrak station at Main Street and Depot Avenue.

The site is the renovated former U.S. Custom House, erected in 1863 at the American end of the Suspension Bridge, which carried a railroad over the Niagara River to Canada.

Today’s Whirlpool Rapids Bridge is built on the same site, but the supports for the original bridge were incorporated into the structure of the adjoining International Railroad Bridge.

Before the bridge was built in 1848, fugitives had to find someone to row them across the river below the falls. The crossing took eight minutes – if all went well.

A covered footbridge, which ran beneath the railroad tracks on the Suspension Bridge, was the route that many escapees used to enter Canada, where slavery had been abolished and the law conferred freedom on any slave who could make it across the border.

The work became more dangerous after 1850, when President Millard Fillmore of Buffalo signed the Fugitive Slave Law that put federal power, led by U.S. marshals, behind the hunt for escapees.

The Heritage Center features a video on the 1853 capture of an escapee in Niagara Falls, narrated by Keith David, the voiceover master familiar from many Ken Burns PBS documentaries.

The capture occurred in the Cataract House, an elite Niagara Falls hotel with a largely Black staff, whose white owners didn’t object to their employees’ constant efforts to facilitate the escape of slaves brought along by vacationing Southerners.

She said the Cataract House display is one of the exhibits that seem to resonate most with visitors. The other is the Escape Gallery, which contains a full-sized model of the Suspension Bridge entrance and tollbooth.

She said the Cataract House display is one of the exhibits that seem to resonate most with visitors. The other is the Escape Gallery, which contains a full-sized model of the Suspension Bridge entrance and tollbooth.

“The floor is wooden just like the bridge originally was, so it’s really an experience that feels what that felt like for freedom seekers,” Santiago said.

The Heritage Center was a must for Careneisha and Deveione Ricard of Denham Springs, La., on their winter vacation to Niagara Falls and Ellicottville.

“I want to see something that has history, so when I saw Niagara Falls has the Underground Railroad Center, I was like, ‘Let’s go to that,’ ” Careneisha Ricard said.

“We are tasked with telling the Underground Railroad story throughout Niagara County,” said Sara Capen, the Heritage Area’s executive director.