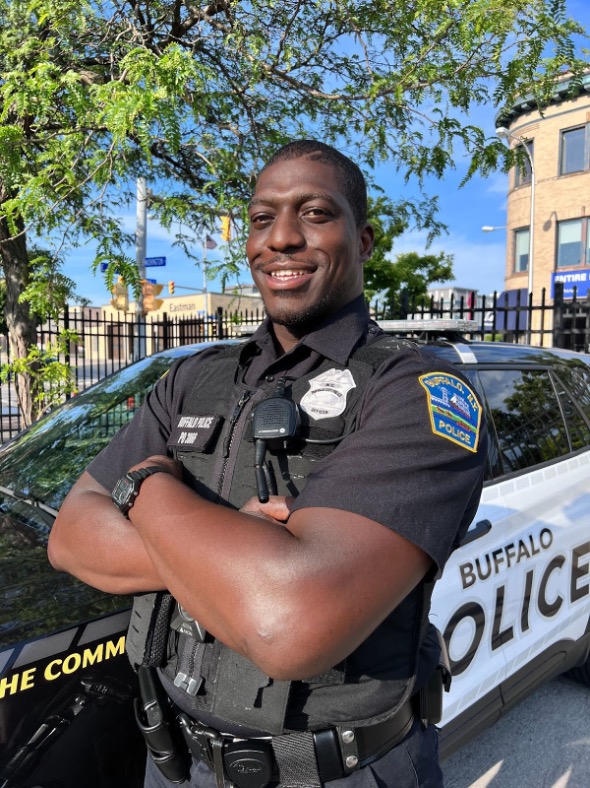 Born and raised in west Buffalo, Davis studied at Liberty University (Lynchburg, Virginia), where he played Division 1 football. After receiving a bachelor of science degree, Niko continued his football career in the NFL with the Pittsburgh Steelers and, subsequently, the Kansas City Chiefs. After retiring from football, Niko worked for both Apple and IBM. In addition, he is an established motivational speaker.

Davis joined the BPD as a patrol officer in 2020 with the desire to make an impact in the city he was born.

“Playing for the NFL was never a given for me,” he said. “I never played football growing up. I even had limited help and understanding applying for college. Graduating from Lafayette High School in Buffalo led me to a Florida School of Discipleship in Fort Myers, Florida. A fellow student there, who wanted to play football himself in college, told me I had talent. We trained together, and he encouraged me to apply to Liberty University, where I was accepted and joined the Division 1 team after a walk-on try-out.”

About his new role, Davis said, “I am honored to serve as an executive director for Buffalo Police Explorers, as I will have the ability to influence teens to become successful adults. All it requires sometimes is discipline and someone believing in you. I can be that person, and it makes me very happy.”

Bence said, ” While I am sad to leave the position, I am grateful to be passing down the baton to such an honorable and deserving man, Buffalo Police officer Niko Davis. He will be able to be a role model for so many with his leadership and inspiring story.”

During Bence’s time as executive director, she spearheaded the first 501(c)(3) for Explorers within the BPD, which enabled the police to fundraise for young teens living in the City of Buffalo. In addition, Bence also created a finance board and initiated several fundraising and awareness campaigns. Finally, collaboratively with the BPD volunteers, she advocated for racial and socioeconomic diversity, and strengthened the connection between the BPD and city residents.

Buffalo Police Explorers are currently recruiting a new class that will start on Sept. 6. All youth living in the City of Buffalo can apply. Applications are due Aug. 23, and are available on the organization’s website buffalopoliceexplorers.com.

Buffalo Police Explorers foster a relationship between Buffalo Police Officers and youth in the City of Buffalo by providing opportunities that promote leadership, confidence, self-discipline and community service, all while developing an awareness of the purpose, mission and objectives of law enforcement and the Buffalo Police Department. Learn more at buffalopoliceexplorers.com.