By the PR TeamApril 8, 2022Turning Heads
No Comments 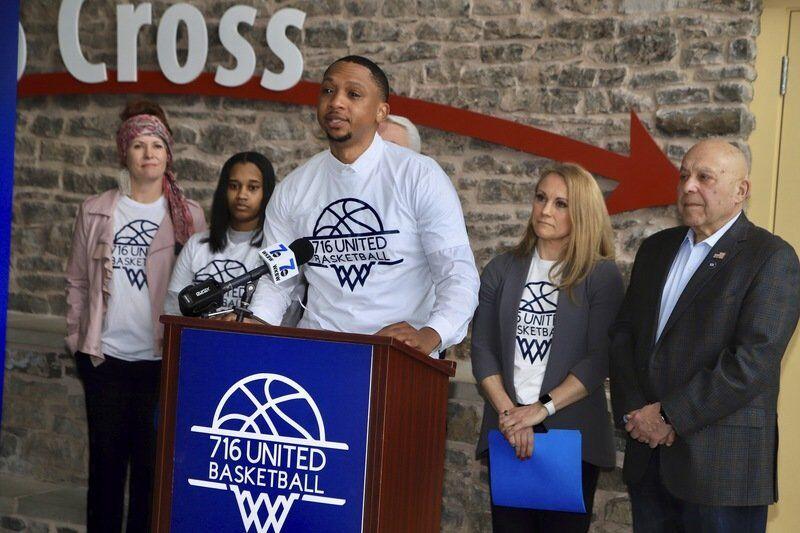 It might seem 716 United Basketball is about hoops but it is so much more. And it is now adding a girls program.

Talk to founder Sanquin Starks for long and the stories flow with infectious enthusiasm. Starks hosted a press conference last week with players, coaches and dignitaries to celebrate the program’s growth and the addition of a girls team coached by Kayla Brown.

“They’ve been absolutely amazing,” Starks said of the Boys and Girls Club. “I’ve talked to Rebecca probably more than my mother.”

It isn’t just about winning, which the AAU boys do regularly, either, but about life.

“Two or three months ago, I had a student at Gaskill not on the right path,” Starks said. “I was meeting with him regularly but he could not continue to play.”

Starks said he stepped back after giving the by conditions on what it would take to return to the program only to get a call from the boy’s dad. That same boy is now pulling an 86 average and is back in the game.

“I know where he came from and the road he was going down,” Starks said. “We have 20 or 30 stories just like that.”

The program has an end game in mind, Starks said.

“Our collective goal is for our city to be a thriving, safe community,” Starks said.

The program is 100% free and hopes to add more sports and more grades over time. For now, the big step is the addition of young women. The impetus came from need with a little nudge.

Capen was emotional in explaining how she decided to be involved. The former Michigan State Div. I field hockey player pointed out this is the 50th anniversary of Title IX.

“It changed who I am today and like Sanquin’s story, it changes youth. Inequality is still real” Capen said. “When you provide access and opportunity at this level, you are creating the next mayor, the next assemblyman, the next superintendent of schools.”

Niagara Falls Superintendent Mark Laurrie was there to show support as were Assemblyman Morinello, the police and fire chiefs and mayor.

Starks said the program would not be where it is today without the support of people like Laurrie.

“I made one phone call and within 30 minutes, I had everything I need,” Starks said. “I still can’t believe it. I still take it all in. When we started we were in a dingy gym with six kids.”

Brown attended Cardinal O’Hara and works at Niagara Falls Memorial Hospital but basketball is her passion.

“We are going to provide a basketball program to meet the academic and social needs of girls,” she said. “We want to coach them to develop a love and passion for the game.”

Morinello talked about the life impact the program is having for young men when they do things like travel to Pittsburgh for a tournament.

As for the next step, Brown said it will be tryouts for the seventh grade age group, hoping to find 12 players but that is just the beginning.