By the PR TeamJanuary 11, 2022Turning Heads
No Comments 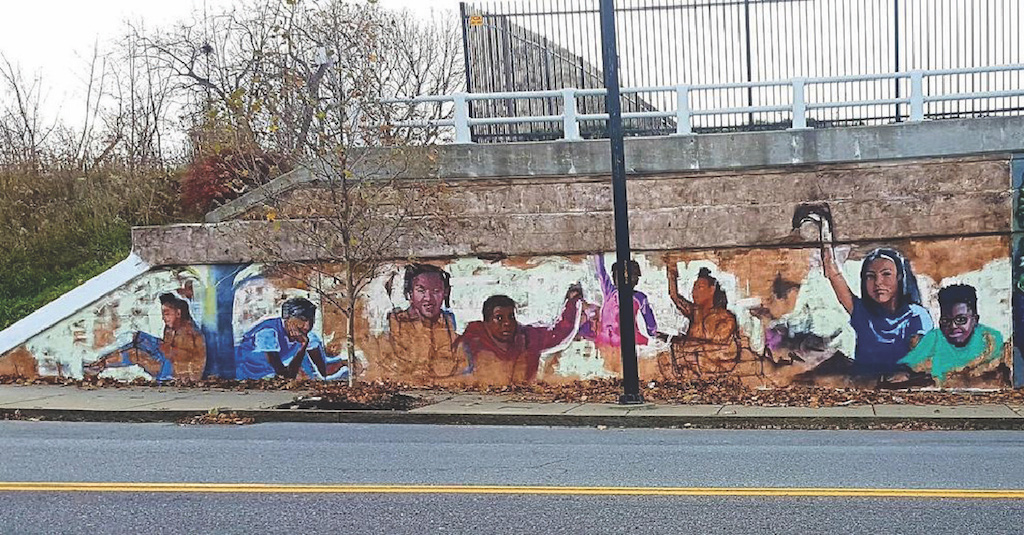 “My dad was one of the first on the scene for testing the soils at Love Canal, the infamous chemical landfill in Niagara Falls,” Zak said. Now, the East Aurora High School class of 1994 graduate and recent MFA grad from University at Buffalo is bringing her own brand of environmentalism to the city.

“I am thrilled to be working on my first solo mural for the Niagara Falls Underground Railroad Heritage Project as part of the Niagara Heritage Arts Mural Project. My mural focuses on the notoriously underserved Highland Community neighborhood, the youth of the area and their role as the future makers and caretakers of the place,” Zak said.

Her mural, nearly completed, will feature youngsters from the largely African American neighborhood front and center. Behind the children, off in the distance, Zak is painting several community leaders as muses to the youngsters. Many are women, since women led the charge to get Love Canal cleaned and lived with its consequences.

“Running through the work are environmental justice themes, since Niagara Falls still has much work to do in order to address this every important issue. All people deserve safe, healthy, clean, pleasant places to live. I really believe that environmental justice is social justice,” Zak said. “The disaster that was Love Canal left a legacy that still affects the inner city’s residents. It’s often the poorer neighborhoods that suffer the long-term effects of environmental degradation. The neighborhoods that suffer from social injustices are bound to have environmental issues, as well. Issues like unsafe housing and substandard infrastructure that cause health issues, which frequently go unaddressed for lack of services. It’s a cycle that keeps repeating itself. Social and environmental justice are tied together.”

Zak said the process of developing her mural took all this into consideration.

“It was obvious the mural needed to be focused on people, rather than just the environment, so it was a matter of seeking out folks in the community who have ties to the Love Canal.”

The Underground Railroad Heritage Project, whose headquarters are nearby, passed on the consensus of their constituents in the neighborhood that the focus of the mural should be the youth of the area. Several parents of the area allowed their children to be models.

Zak began her project in the late fall, sketching and then painting entirely free-hand, which she says, “means that I get to play around with all the mistakes, my favorite way of working.” Although her design was approved by a committee from the Heritage Project, she, “work(s) intuitively and spur of the moment.” She uses a hydraulic lift to move herself along the wall. For materials, she chose exterior acrylic paints, which she’ll seal with a clear coat once the project is complete.

“The beauty of acrylics is that I tend to end up going over things a lot and redoing moments and changing colors,” she said.

She’s created quite a stir in the neighborhood with many folks stopping by to watch, taking business cards and sharing their thoughts.  She is no stranger to large works of art. “I like to work big,” she said. A browse through her online gallery at sarazak.com will confirm that. Although this is her first solo mural, she was involved in one collaborative mural last summer with Cecily Brown and the Arts Collaboratory Working Artists Lab at 431 Ellicott St. in Buffalo.

Zak founded Painting for Preservation! 10 years ago to draw attention to distressed, at-risk and under-utilized historic locations through on-site art making. She hosts outdoor gatherings of artists in all media at local historical sites such as Silo City, the waterfront, the Larkin Power House and old firehouses where they create artwork to raise the public’s awareness of the plight of these places. Proving that she walks the walks as well as talking the talk, Zak’s studio is now at the 90-year-old, recently rehabilitated Niagara Frontier Food Terminal.

Zak’s artwork resides in private collections across the country as well at the Burchfield-Penney, Roswell Park, Hallways and Albright Knox. She also teaches drawing and painting at Villa Maria College. She and her husband, Paul Zak, are bringing up two youngsters who are in East Aurora schools.